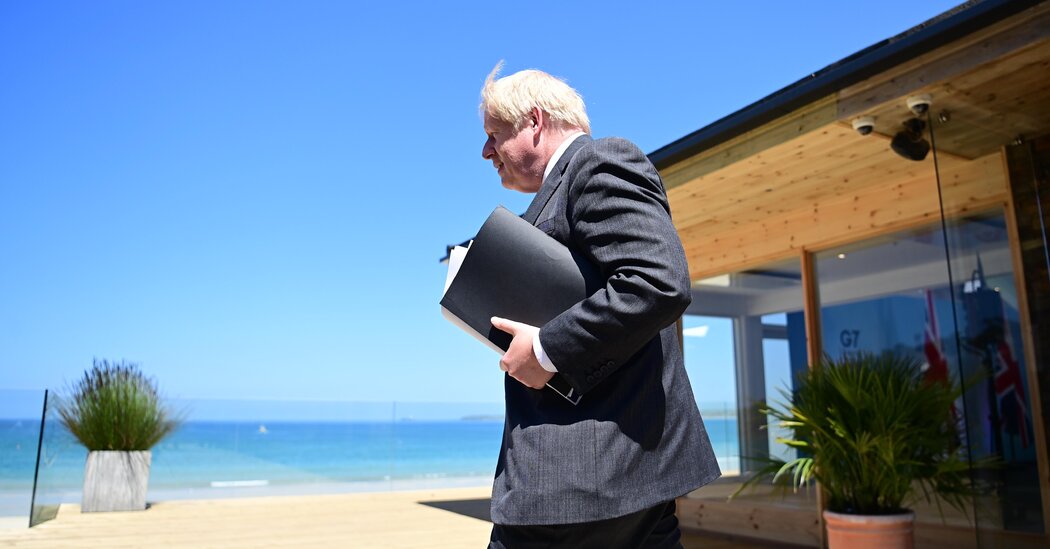 FALMOUTH, England — With an idyllic view of the Cornish coast as a backdrop, Prime Minister Boris Johnson had an unmatched setting in which to launch his dream of a Global Britain. But as Mr. Johnson drew the Group of 7 meeting to a close, Brexit and the pandemic conspired to cloud its debut.

Rather than extolling global agreements to combat climate change or confront China, Mr. Johnson found himself at a news conference on Sunday dodging questions about a four-week delay in Britain’s reopening of its economy and trying to play down an ugly clash with the European Union over Northern Ireland.

The latter issue dramatizes the long shadow Brexit is casting on Mr. Johnson’s effort to rebrand Britain as a vital player on the global stage. Not only did Northern Ireland poison Mr. Johnson’s talks with President Emmanuel Macron of France, but it also threatens to undermine his relationship with President Biden.

The meeting, which brought together world leaders for the first time in person since the departure of President Donald J. Trump, did achieve a striking change in tone after four years of turbulence. With Mr. Biden a good-natured guest, the United States swung back into alignment with its allies in Europe and elsewhere.

That spared Mr. Johnson the ordeal of Prime Minister Justin Trudeau of Canada, who could not get Mr. Trump to sign on to a Group of 7 communiqué in Quebec three years ago. Mr. Johnson’s document was hardly a “Cornwall consensus,” but it nevertheless was a show of comity, enthusiastically endorsed by Mr. Biden.

“The world was looking to us to reject some of the selfishness and nationalistic approaches that have marred the initial global response to the pandemic,” a visibly relieved Mr. Johnson said to reporters. “I do hope we have lived up to some of the most optimistic of hopes and predictions.”

Critics noted that the headline commitment by the world’s richest countries to donate more than one billion doses of coronavirus vaccine to the developing world by next summer falls far short of the 11 billion doses that the World Health Organization says is necessary to eradicate the pandemic.

The urgent need for vaccines was driven home by the expected postponement on Monday of Britain’s plan to reopen, caused by the spread of a variant known as Delta among the unvaccinated population. On Sunday evening, Mr. Johnson left Cornwall as soon as he saw off his guests so he could huddle with advisers in London over the latest scientific data on infections and hospitalizations.

“When you’ve got a coronavirus raging around the world, one billion doses by next summer is not a deliverable worth mentioning,” said Jamie Drummond, who co-founded the advocacy group One with Bono, the lead singer of U2. “By next summer, it’s a death sentence for millions.”

On climate change, where Mr. Johnson had promised a Marshall Plan-like effort to curb carbon emissions, the Group of 7 failed to a set a firm date to phase out coal-burning power plants, a primary contributor to global warming. The prime minister will get another chance to nail down commitments in November at the United Nations’ climate change conference in Glasgow.

Still, it was not the failure to strike global deals that marred Mr. Johnson’s Group of 7; such deals are elusive at these meetings, no matter the host or the political atmosphere. It was the jarring intrusion of Northern Ireland into the proceedings.

Mr. Johnson and Mr. Macron had a tense exchange over post-Brexit trade arrangements for the region. British officials are demanding that the European Union change the current system — designed to avoid new barriers between Ireland, an E.U. member state, and Northern Ireland — because it says that checks on some goods flowing from mainland Britain to Northern Ireland are driving a wedge between two parts of the United Kingdom.

British newspapers reported that Mr. Macron suggested Northern Ireland was not part of the union. The French president said later he had never questioned “the integrity of the British territory” but insisted that Britain needed to abide by the terms of the deal it signed with the European Union in 2019.

Mr. Johnson, for his part, asked Mr. Macron how he would feel if sausages could not be shipped from Toulouse to Paris. The prime minister initially seemed ready to wind up the dispute, perhaps for a domestic audience, before striking a more statesmanlike pose as the summit concluded.

“I’ve talked to some of our friends here today who do seem to misunderstand that the U.K. is a single country and a single territory,” Mr. Johnson said on Saturday to Sky News. “I think they just need to get that into their heads.”

The subject also came up with Mr. Biden. The national security adviser, Jake Sullivan, told reporters that “they had a candid discussion of it in private” and that the president urged the prime minister to protect the Good Friday Agreement, the 1998 accord that ended decades of sectarian violence in Northern Ireland. Tensions over trade have ignited street clashes in Belfast and other cities.

On Monday, however, Mr. Johnson seemed unbowed. Speaking at a NATO summit, he reiterated Britain’s determination to defend its territorial integrity. Analysts said the British government had concluded that Northern Ireland was crucial enough to risk jeopardizing other relationships, even with the United States.

“Johnson is willing not only to contemplate a trade war with Europe but also to ignore the very strong advice he got from Biden in private,” said Mujtaba Rahman, an analyst with the political risk consultancy Eurasia Group. “He was more than willing to allow the row to overshadow Britain’s coming-out party.”

At his end-of-summit news conference, Mr. Johnson played down the spat. He insisted it occupied a “vanishingly small proportion of our deliberations.” And he expressed enthusiasm about his first face-to-face interaction with Mr. Biden, whose aides initially viewed Mr. Johnson with suspicion because of a perception that he was an ideological twin of the populist, pro-Brexit Mr. Trump.

Mr. Johnson explained his cultivation of Mr. Trump by saying, “It is the job of all prime ministers, everybody who does my job, to have a close working relationship with the president of the United States.”

Since the American election, however, Mr. Johnson said he and Mr. Biden had found common ground on issues like climate change, education for women and girls and a middle-class economic agenda. He likened the Biden administration’s massive infrastructure bill to his promise of “leveling up” the economically struggling north of England with the more prosperous south.

“When it comes to building back better,” Mr. Johnson said, “we’re totally on the same page. It’s been very interesting and very refreshing.”

Share this…FacebookPinterestTwitterLinkedin Dr. Scott Gottlieb, former commissioner of the US Food and Drug Administration said the US isn’t doing a good job of measuring how…

Share this…FacebookPinterestTwitterLinkedin Every now and then, a health paper touts the health advantages of consuming alcohol, which is always reassuring, especially when you’re suffering a…

Share this…FacebookPinterestTwitterLinkedin TOKYO — Every four years, the Olympics are filled with feats of athletic excellence and moments of unbridled celebration. That has been the…