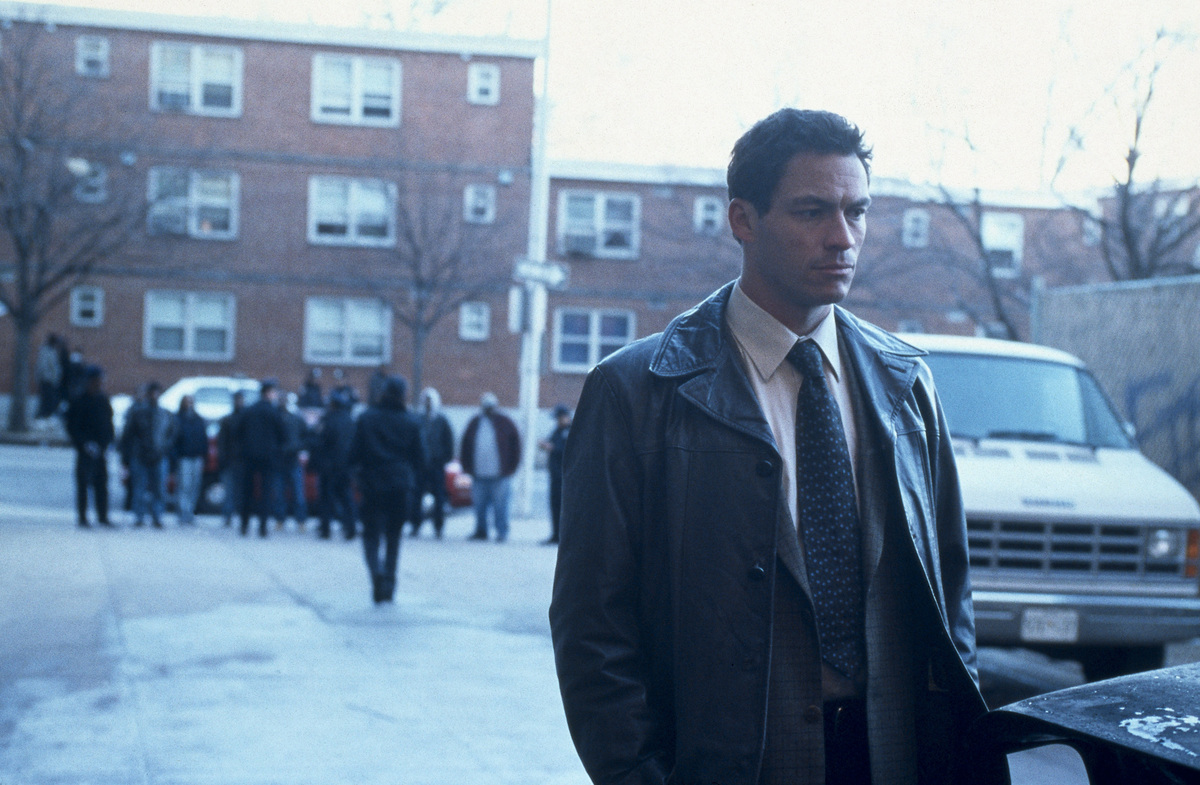 David Simon created two of TV’s most groundbreaking series about the failure of the war on drugs, set in the neighborhoods of Baltimore: HBO’s The Corner and The Wire.

Still, even as he allows that those shows — with their visceral look at the intersection of race, policing, violence and tragedy — may have helped people question five decades of failed drug policy, Simon says he remains a “cockeyed pessimist” on the question of whether the war will ever end.

The way most American TV shows depict that effort is a major reason why. This year marks the 50th anniversary of President Nixon’s declaration of a “War On Drugs”: a global strategy by the federal government to crack down on the illegal drug trade. (Critics suspected it was also an excuse to send law enforcement after groups critical of Nixon’s policies, especially antiwar liberals and Black people.)

To trace how scripted TV shows have impacted the public’s view of the war on drugs, I spoke to a range of people in the industry, from the executive producer of Miami Vice to the author of the book that inspired Netflix’s prison drama Orange Is the New Black. Most said they believed scripted TV shows had a serious and sometimes unrecognized impact on public attitudes, simply by encouraging audiences to empathize with some parts of the process, while keeping more troubling aspects firmly out of view.

As a longtime, outspoken opponent of the aggressive arrest and imprisonment efforts central to the War on Drugs, the Emmy-winning TV producer David Simon sees two big problems with typical police dramas. First, he says, they depict situations where cops — however flawed or troubled — are society’s stalwart defense against lawless drug dealers and addicts. He calls that “The Thin Blue Line” narrative.

Secondly, Simon adds, such shows are almost always written from the perspective of law enforcement. And as any good producer can tell you, where you place the camera is where the audience will empathize.

“I don’t think we can [correct] this narrative … it’s just too much fun,” Simon says, ruefully. “For normative America, for the America that isn’t vulnerable to these [enforcement] policies … it’s a modern day western.”

Drug war blues and Miami hues made a hit combo

It wasn’t until 1984, when NBC unveiled a little series called Miami Vice, that TV’s war on drugs got a serious makeover.

Oscar-nominated director Michael Mann, who served as executive producer of Miami Vice, said the iconic show’s premise was inspired by forfeiture laws allowing police to use any assets seized in drug arrests. Toss in telegenic stars Don Johnson and Philip Michael Thomas as James “Sonny” Crockett and Ricardo “Rico” Tubbs, a throbbing theme song from Jan Hammer and a setting in the sexy, mysterious world of Miami’s underworld, and you had a TV classic. 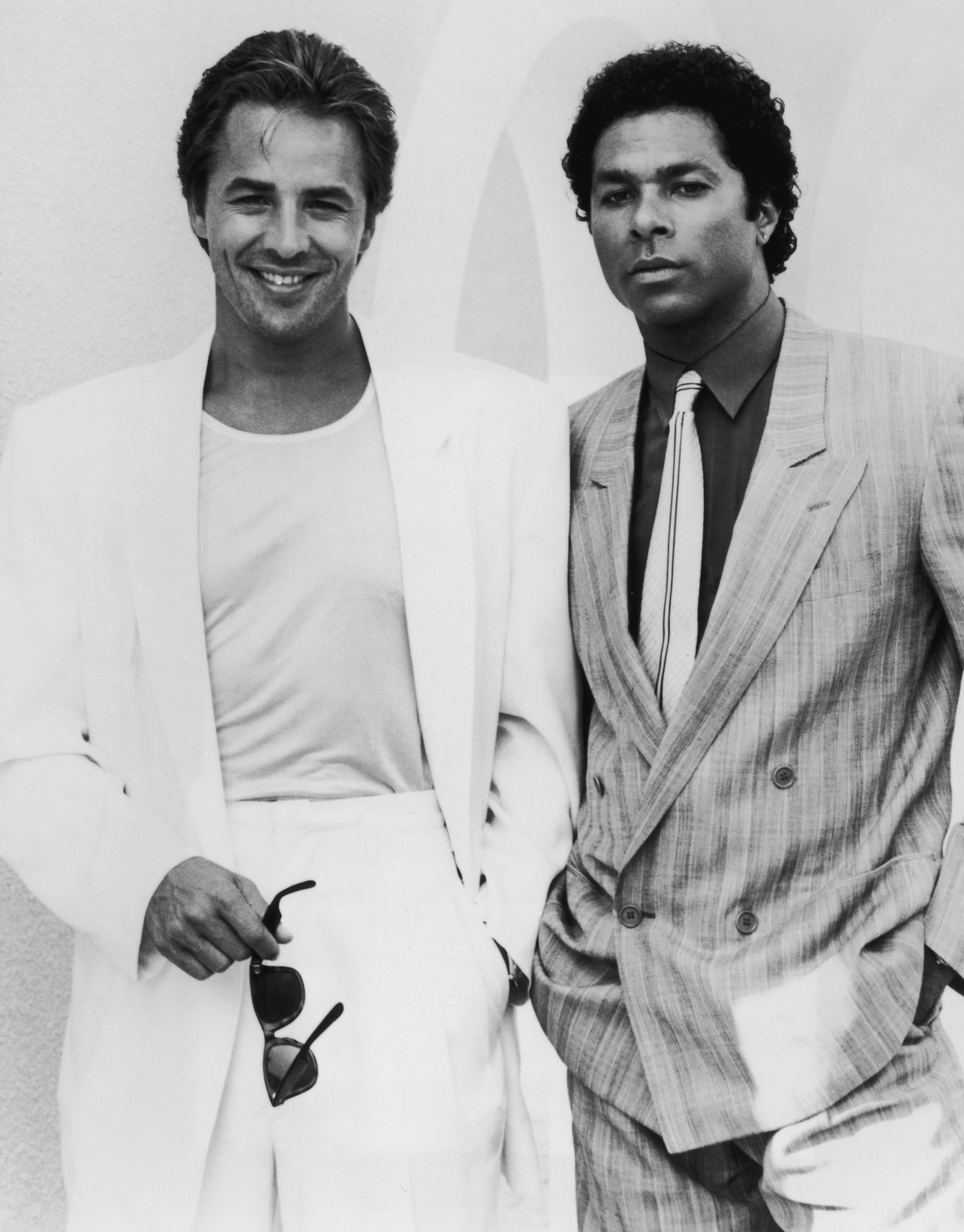 Mann says the show, initially called Gold Coast, had storylines based on scuttlebutt they heard while hanging out in Miami clubs with actual criminals. “Miami was really Casablanca,” says Mann. “It was the northern banking capitol for the whole of the South American drug trade … just this gorgeous, Caribbean twilight zone in which anything seemed possible.”

Cultural critic Nelson George says Miami Vice combined the story of the cool outlaw and stalwart law enforcement officer into one mesmerizing tale. “Americans love gangsters,” he adds. “The War on Drugs … that’s the American narrative, that we’re fighting our best against this tide. (The audience) can also enjoy the glamour and the perks of having outsider figures who can dress better than the average cop, have nicer cars and better soundtracks. Now that’s sexy.”

But Mann insists Miami Vice wasn’t intended to glorify drug traffickers or the cops hunting them. Instead, he was inspired by the global scope of the drug trade. By 1990, the year Miami Vice ended, that passion would lead Mann to craft an Emmy-winning miniseries on the murder of federal agent Kiki Camarena in Mexico, Drug Wars: The Camarena Story. “The objective reality was epic. And our miniseries drove deep into the heart of many people … who do this global work to try and disassemble a very complex, transnational, organized criminal activity.”

These shows presented the drug trade as a global danger imported from outside America, often from south of the Mexican border. Perhaps not coincidentally, a Gallup poll in 1989 found 63% of Americans saw drug abuse as America’s number one problem, reflecting a rising hysteria about crack cocaine and drugs from Mexico (by 2014, that number would be down to 1%).

In the late 1990s, TV producer Neal Baer pitched a bold storyline to NBC executives: Dr. John Carter, a popular character played by Noah Wyle on NBC’s hit medical drama ER, would develop an addiction to painkillers, get caught and go into rehab.

Baer, a Harvard-trained doctor, was working as a co-executive producer on the show. He knew the head of the National Institute on Drug Abuse was passionate about ideas that addiction could be a brain disease. “That hadn’t been done with a main character, a lead character, showing that he wasn’t a bad person or evil,” says Baer of the storyline, which became a landmark moment in the show’s sixth season. “We really worked on the notion that it wasn’t a weakness of personality, it wasn’t a lack of willpower. It was some kind of function of your brain and its interaction with alcohol and drugs.”

In the early 2000s, a few series in the newly-emerging world of cable TV also humanized drug users and looked skeptically at law enforcement. Simon’s The Corner (2000) focused on a family in West Baltimore torn apart when both parents became addicted to drugs and their son became a dealer. The Wire (2002) showed how the drug trade became the only employer in poverty-stricken neighborhoods that cops often viewed as enemy territory. On FX, The Shield (2002) depicted how a drug task force in Los Angeles, given wide latitude to break any rule in cracking down on drugs, birthed a corrupt cop capable of murdering another officer.

Shawn Ryan, creator of The Shield, says there was likely an additional reason that public sentiment regarding the war on drugs shifted towards leniency and understanding for users back then. “I think it was easy for white America to have one point of view about the drug war when it was mostly hitting minority communities,” says Ryan. “What really changed in the mid-2000s was the opioid epidemic that began to affect people, especially white people in rural communities. And the minute someone in your community is dealing with these problems, you tend to look at the problem differently.”

Despite advances in more nuanced portrayals, research showed TV still wasn’t providing an accurate picture of drug enforcement. In 2011 – the 40th anniversary of the war on drugs — The Lear Center released an analysis looking at episodes of popular shows like Law & Order and CSI: Crime Scene Investigation. 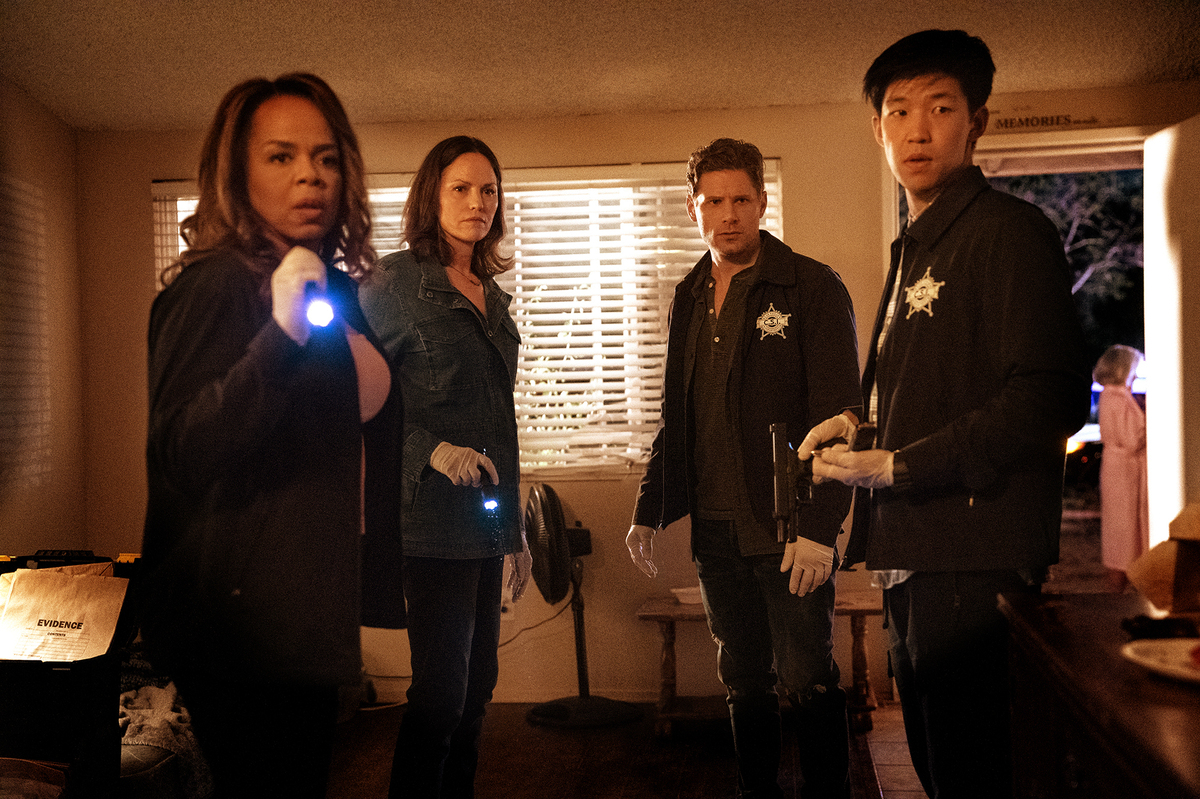 The study, called The Primetime War on Drugs and Terror, found these shows failed to reflect how non-white people are disproportionally arrested and punished in drug enforcement. According to the study, Black people were 13 percent of drug users but 43 percent of those jailed for drug violations. Another analysis the Lear Center released last year with Color of Change, Normalizing Injustice, found a similar dynamic.

These series may have been showing that the drug war wasn’t working, but they weren’t depicting an important reason why it was failing: disproportional punishment given to people of color and the poor.

TV producers may have been caught in a catch 22: If they show how often Black people are arrested, they could be accused of stereotyping. Still, not reflecting that reality depicts a criminal justice system much more evenhanded than the reality. “We found a real reluctance to deal with any kind of racial issues in the criminal justice system,” says The Lear Center’s Blakley, who worked on both studies. “It just slaps you in the face the degree to which they avoid the topic.”

As the public becomes more cynical about the war on drugs, TV shows have emerged to reflect that attitude.

Piper Kerman, who wrote the book on which Netflix’s prison drama Orange Is the New Black is based, was unexpectedly caught up in the war on drugs. As shown in the series, she was prosecuted for helping to move drug money overseas, years after she had built a new life; now, she calls most filmed entertainment about criminal justice “copaganda” — pushing the perspective of law enforcement or policymakers. 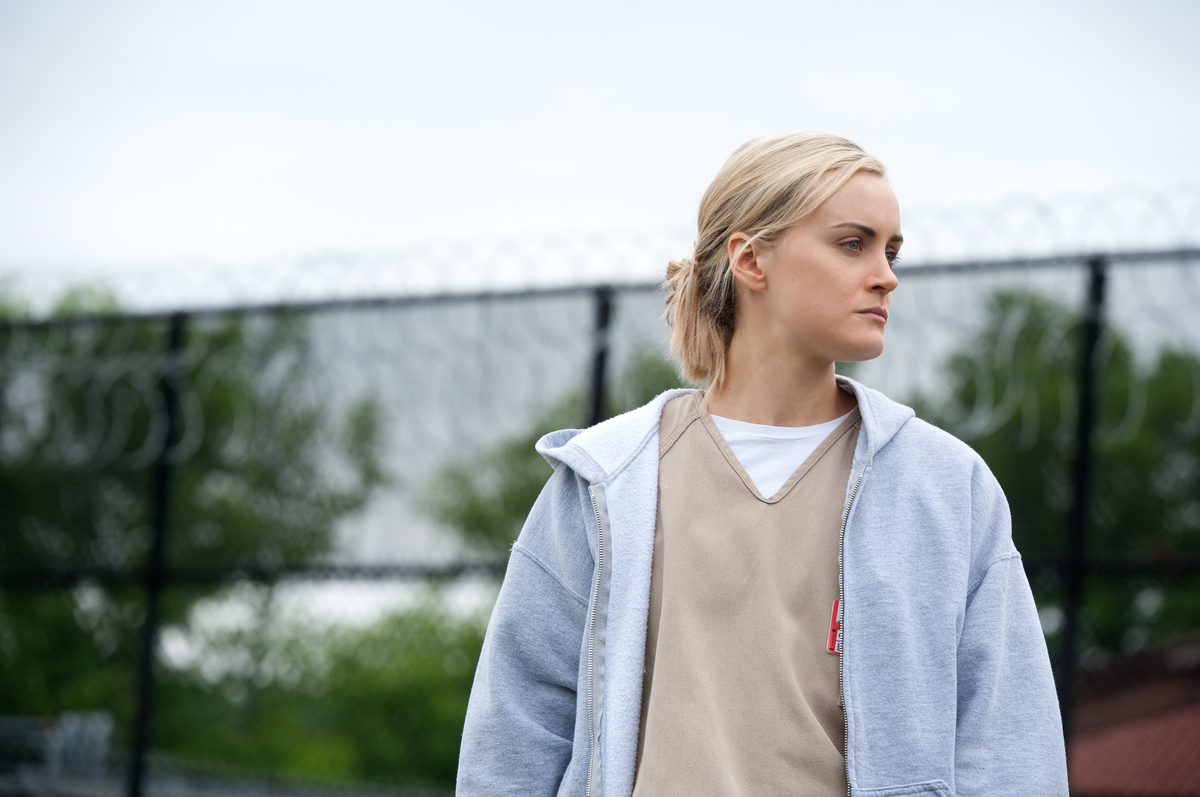 Kerman says her story wasn’t that unique – except she was white, from a middle-class environment and attended college. The Netflix show, created by Jenji Kohan, drew raves for how it depicted the reality of how many women of color were in prison for drug crimes connected to poverty, lack of employment opportunity or lack of education.

“The best thing that Jenji did was decline to follow this sort of Tony Soprano, Walter White big anti-hero story and create this world where you had many different female protagonists who get their time in the sun,” Kerman says. “That’s why the show was so resonant with audiences…that departure from the big, white male anti-hero.”

“John came in and said, ‘This is the story of my hood, where I was raised,'” adds Mosley of Singleton, who died in 2019. “There are millions of people who know what we’re saying is true, but who have never seen it on television.”

This summer The Wire‘s David Simon begins filming a new opus about the consequences of the drug war; a limited series for HBO about corrupt cops called We Own This City. Based on the true story of how an elite plainclothes task force in Baltimore stole money and drugs for years, Simon says the series outlines what happens when a police force rewarded for mass arrests and big drug seizures forgets how to actually solve crimes like murder, rape and assault.

Even though people want to ignore it, you can’t stop the drug business in America by enforcing the law. Americans like to get high. And that is the reality that America does not want to face.

“The drug war basically destroyed policing,” says Simon. “They look upon the neighborhoods not as places they’re supposed to protect and serve, but as places where they hunt prey and their avarice is rewarded.”

Nelson George, the cultural critic, says TV’s depiction of the American war on drugs failed to capture the truth because many series simply couldn’t convey a troubling and more fundamental reality. “Even though people want to ignore it, you can’t stop the drug business in America by enforcing the law,” he says. “Americans like to get high. And that is the reality that America does not want to face.”

Share this…FacebookPinterestTwitterLinkedin Here’s what you need to know: Rayssa Leal of Brazil competes in the women’s street preliminary round at Ariake Sports Park in Tokyo…

Share this…FacebookPinterestTwitterLinkedin Japan’s Aori Nishimura competes during the street prelims on July 26. (Patrick Smith/Getty Images) The Olympics began only on Friday, and already the…

Share this…FacebookPinterestTwitterLinkedin At least seven people were killed in a multiple-vehicle crash near Kanosh on Sunday, as drivers were blinded by a sandstorm. The Utah…